Ever introduce a pushbutton into your electronics project but have trouble getting a stable reading? Have you read about “debouncing” a button and want to learn how to easily accomplish this in software? This article goes over the background of switch and button debouncing and walks through my MicroPython code to accomplish this.

So what even is debouncing? Whenever you press a button or flip a switch the signal takes a little bit of time to stabilize. Take for example a simple pushbutton that is using a pull-up resistor to 3.3V. When not pressing the button the power source pulls up the microcontroller input pin to 3.3V. MicroPython reads this value as a digital 1 indicating that the button is not being pressed. When the button is pressed down the input to the microcontroller is shorted to ground so that a digital 0 can be read. 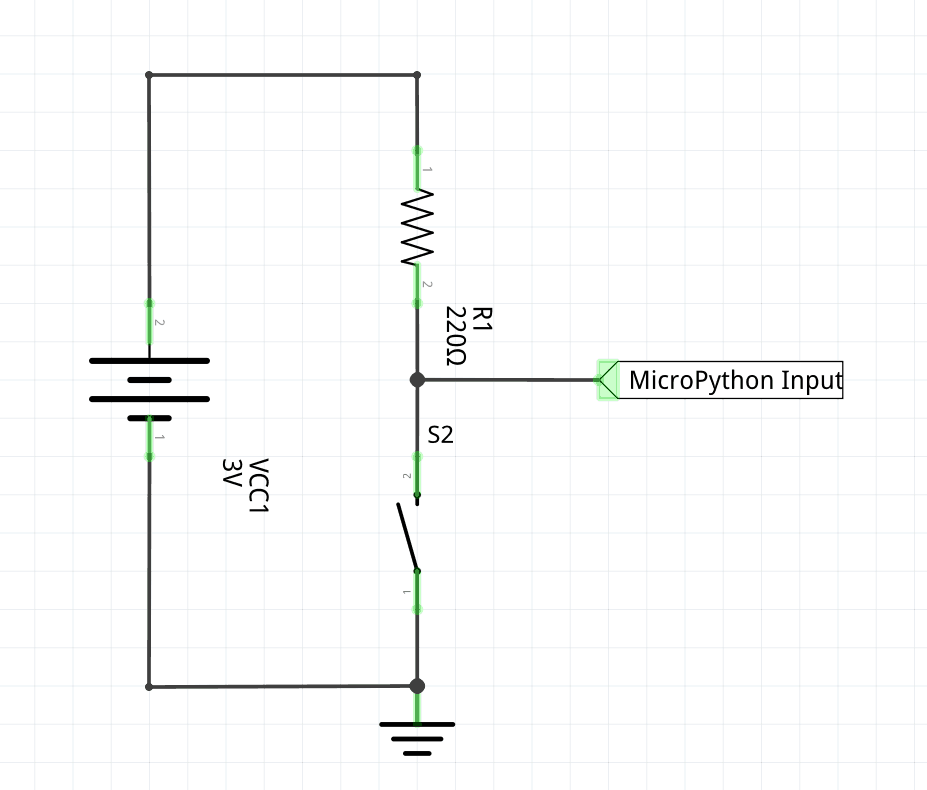 Note that lots of devices have internal pull-up resistors for use, rather than adding an external resistor to the board.

So while this is a pretty basic circuit, the debouncing issue occurs when reading the voltage at the MicroPython input continuously, you begin to see glitches in the signal. To show this, I did a simple breadboard with a pushbutton and power supply (FYI, this awesome SparkFun kit makes it really easy to add 3.3V/5V to a breadboard from a USB cable). 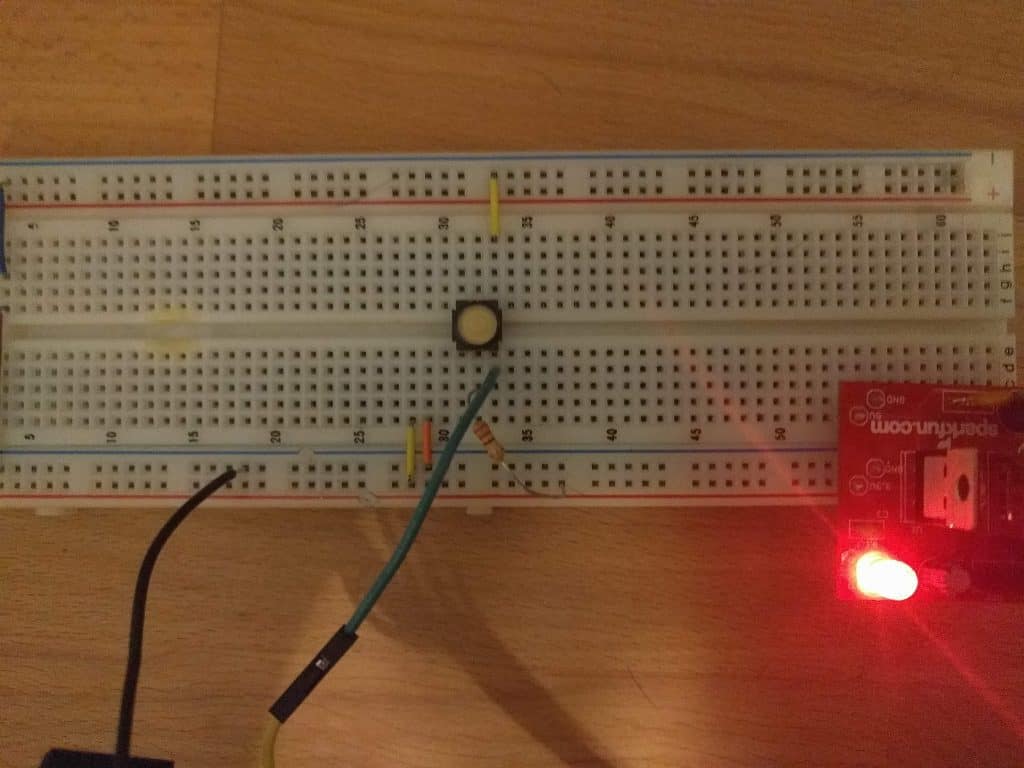 Now to demonstrate the glitches that occur when using a button, I used my logic analyzer (consider getting a USB logic analyzer if you don’t have one) to capture the voltage at the switch that could be fed into a microcontroller. You can see in the screenshot below that channel 0 goes low twice before stabilizing at 0V. The whole process only takes around 20 microseconds but it’s enough to cause debounce issues. When the microcontroller samples the voltage you may get an “ON, OFF, ON, OFF” pattern within that 20 microsecond period. The screenshot below captures just one demonstration of debouncing, there are lots of factors that go into a debounce period including the mechanical properties of the button and how the user presses it.

So we’ve identified the problem but how can we solve it? I’ve developed a MicroPython class that is fairly simple but reliably debounces switches and buttons. The general algorithm works like this:

Below is the class in its entirety, as you can see it’s not a ton of code, but it’s very effective for debouncing.

Now that you have some background on the class itself, let’s look at how to use it in a real application. The class provides us with two important variables:

Because the class could be updating these variables at any time, including the timer callback functions, we need to make sure that we don’t modify these variables when the switch class might be modifying them at the same time! To do this, we can disable interrupts for a short time to read and copy the switch’s value into a local variable.

This software demonstrates a basic debouncing technique that is still extremely effective. Adding this class adds minimal code size and processing overhead and makes it easy to debounce correctly. I’m using this technique in various electronics projects. Check out my GitHub Repo where I’ve shared the code along with the example.

While this class isn’t a ton of code, MicroPython could run out of memory while trying to run the module. Fortunately, there is a way to cross compile our code from Python source to bytecode. The bytecode will execute the exact same way as the original Python source but takes up less memory and can actually execute faster.

To cross compile your own version you first need to clone the MicroPython repository.

After cloning you can checkout the version of the repository that matches the MicroPython firmware version you’re running. In this example I’ll checkout version 1.9.4.

Next, you can compile the cross compiler by running

This creates the .mpy file you can upload to your device just like any other MicroPython .py file.

Some things I’d like to add in the future to improve the class: